For Food Allergy Kids (and their Parents) On the Go: Lucy's Cookies! 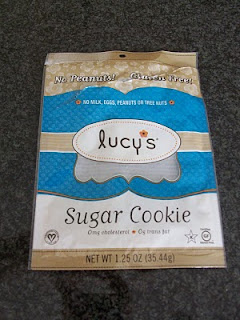 When my daughter was first diagnosed with her allergies in 2004, snacks and especially baked treats that were made in dedicated nut-free facilities were all but non-existent. Those that did exist were not widely available--you had to trek to specialty markets, etc. For a mom with a preschooler and a toddler at the time (yours truly) that was not easy to achieve. I ended up earning a inadvertent master's degree in home baking that serves me well to this day, but was time-consuming to say the least.

Picking up a snack on the go for my food-allergic daughter at say, Starbucks, was also out of my reach. After Kindermusik in town, we liked to go get something to eat and drink. She could never buy anything to eat at Starbucks and I always had to bring something. I know she coped with it fine, but there were days when she really, really wanted to be able to get a snack there like everyone else.

For today's parents of very young kids with food allergies, you now have the option that I didn't when you drag the kids to Starbucks for your daily dose of caffeine: Lucy's Cookies. These have been available at Starbucks for a few months now, and my daughter recently tried the sugar cookie (there are several other varieties, including chocolate chip) for the first time. I took a small bite as well to see how it tastes. Made of all natural, organic ingredients, these cookies do not contain most major allergens including nuts, dairy, eggs and wheat. The sugar cookies contained, of all things, chick pea flour! To me, the cookies were very good and crunchy and I liked the fact that they were made for a healthy lifestyle as well as food allergies. Another bonus: they are one of the few "organic" and "vegan" snack foods I've found that are not processed alongside of peanuts and tree nuts.

My daughter can have wheat and dairy, so I wondered what she would think of the cookies. She reported that they were "different but good." That was the same response I had. I liked that they were not overly sweet and they had a great crunchy texture.

Mainly, I'm thrilled that my kid can now feel included in picking up a treat when we stop in to Starbucks. It's not a slice of lemon pound cake or a chocolate brownie, but to be able to get a snack on the go after all these years, is a great feeling. And it means less baking for me! :)
Posted by Jenny at 7:02 AM

These cookies are great. Sometimes when we are out, we'd go to Starbucks, I got a coffee and my daughter got a horizon chocolate milk but I could not get her anything else. Then recently they started selling these cookies and we're both happy that there is something safe for her to have.

Not personally dealing with allergies, but looking to bake nut-free for someone else?

The Nut-Free Mom Blog Is an Award-Winner!

If you have medical questions, please contact a qualified doctor. For specific product questions, call or e-mail companies directly for the most up-to-date information. Thanks!

The information on this site is not intended to replace professional medical advice and/or care. Always consult your allergist with any questions about medications, epinephrine autoinjectors, allergy testing, foods you should avoid, allergic reactions or other medical issues. Thanks!

As product information and manufacturing processes change, the consumer maintains responsibility for ensuring any product mentioned on this page is free from any or all allergens that pose a concern. If you have questions about foods you see mentioned here, please contact the companies directly for more info.